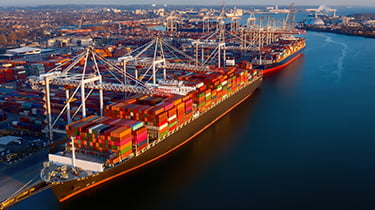 UK exports to the EU are still significantly below pre-Brexit levels, according to the Office for National Statistics (ONS).

There has been a recovery after a steep drop of 40 per cent in January 2021 at the end of the transition period, according to the figures.

Trade recovered to finish last year down 11 per cent, based on the figures from 2018, which are seen as the most reliable comparison, as Brexit stockpiling and the pandemic subsequently affected trade.

One business told the Guardian newspaper it was like “the same nightmare week after week”.

Mark Brearley’s company, Kaymet, has made and sold tea trolleys, trays and hotplates from its factory just off the Old Kent Road to customers including the British royal family.

But he said leaving the EU has added to costs and makes selling items abroad more difficult.

“There are loads of things I could’ve been doing if it wasn’t for these problems. We could do things that take us forward, rather than back.”

He added: “A lot more time is spent with things going wrong. The EU really feels like the hardest place in the world to ship things to sometimes.”

His comments come as the UK and EU remain deadlocked over the Northern Ireland Protocol, which covers trade between Great Britain, Northern Ireland and Ireland. The Government has announced plans to introduce a law that could override the Brexit deal

The deal was agreed with the European Union (EU) in 2019 and has been a source of tension since it came into force at the start of 2021.

Fears of trade war with EU

The Guardian newspaper reported that this has sparked business concerns of retaliation from the EU and the threat of a trade war.

This comes as the Office for Budget Responsibility, the Treasury’s economics forecaster, expects Brexit to cost the economy four per cent of GDP over 15 years.

The report adds that some sectors have suffered worse than others with exports of clothing and footwear to the EU are both down by almost 60 per cent compared with 2018.

Foodstuffs, such as meat exports, are down by almost 25 per cent and vegetables and fruit by 40 per cent, while car exports are down by more than a quarter.

For help and advice with related matters, please get in touch with our expert team today.